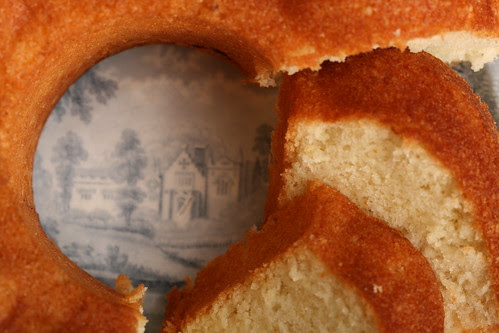 Have you been making ice cream or perhaps zabaglione recently? If yes, then you're left with lots of egg whites. Last weekend we had blackberries with zabaglione at friends' place, and were left with 6 egg whites after that. K. had already made the most beautiful macarons for the New Year's Eve party (see Flickr photo set here), so I had to come up with another idea. Meringues or pavlova are always an option, but then I remember an egg white cake recipe my schoolmate Kristel had shared on my Estonian site, where it had got good reviews. I decided to give it a go.

It's a bit similar to the famous Angel Cake (heavy on egg whites, no egg yolks), but it's not as virtuous as it contains almost a stick of butter. Psst - don't tell anyone! :)

And it was lovely. Very simple to make (especially with the help of my trustworthy KitchenAid Stand Mixer), and I loved the dense, moist and small crumb of the resulting cake. I made a plain version, but would consider adding some Nielsen Massey Madagascar Bourbon Vanilla Extract or real vanilla seeds, or perhaps couple of drops of Boyajian pure orange oil next time.. In any case it's a good recipe to have on hand when you've got lots of egg whites but don't feel like making meringues.. 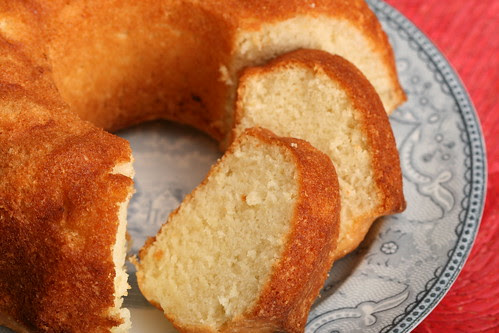 Whisk the egg whites with 2 Tbsp of sugar until thick and pale and very foamy. Mix the rest of the sugar with flour, potato starch and baking powder, then sift into the egg mixture and fold in gently.
Finally fold in cool melted butter.
Pour the batter into a buttered bundt-form and bake in a pre-heated 180 C oven for 30-40 minutes. Test for doneness with a wooden toothpick.
Cool slightly before turning out of the cake tin.

Your feedback about this particular post or Nami-nami foodblog in general is much appreciated.
Thank you so much for taking the time and commenting!
Pille @ Nami-Nami